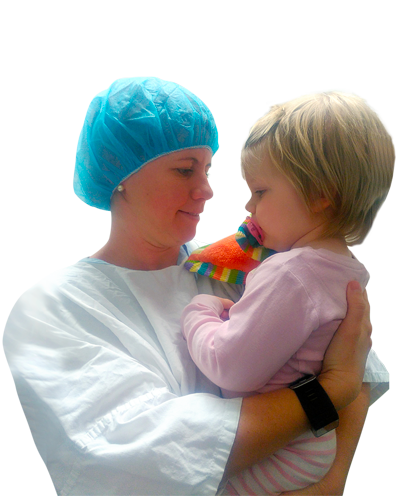 “The ferocity of the beast terrifies me. It has brought me undone. My heart aches for all parents who have had a child taken by the beast that is brain cancer. I’m also petrified for us as this beast is relentless. You think it’s gone, but then out of nowhere, it is everywhere. The terror I feel is like a vice on my chest.

My beautiful daughter Bella is 7 years old and has been battling brain cancer (anaplastic ependymoma) since she was 13 months old. Instead of being able to enjoy being a toddler, Bella literally fought for her life. She has been through 8 brain surgeries and multiple rounds of chemotherapy. At age 2 she received a terminal diagnosis after the recurrence of her tumour. Due to the aggressive nature of her tumour, her future is still uncertain. Current treatment options for childhood brain cancer are limited and have significant, long-term effects.

Those first days and weeks after Bella’s diagnosis were worse than any nightmare a parent could imagine. So much so that my brain has blocked a lot of the finer details and moments that we experienced.

What my brain cannot sensor is the absolute sheer terror, horror and even disbelief at the reality of the situation. It was incomprehensible. Even now, when I try to think back to then, the terror and horror still overwhelms me. I don’t know if that will ever change. There were days during which we were unsure Bella would pull through. Even after coming out of her coma, we did not know what would come next.

Ependymoma is the third most common brain tumour diagnosed in children and is most seen in children under the age of 5. There are different types of ependymoma, ranging from grade 1 to grade 3 (grade 3 being the most aggressive). It is a primary tumour, occurring in the central nervous system (brain or spine). The cause of ependymoma is currently unknown. These are just some facts… now here is a dose of reality.

Bella was diagnosed just after she turned 1 with the most aggressive form – a grade 3 anaplastic ependymoma.

Over a period of about 6 weeks, Bella went from being clingy and not wanting to sleep or eat to the point that her motor functions started to regress. I had a horrible feeling something was terribly wrong, but when I took her to get checked out no one would believe me, and I just kept getting told to go home.

I thought I was going mad and started to doubt myself and my intuition. Bella started dragging her right leg when we were holding her fingers to help her walk. Then she had trouble crawling and I knew I was not imagining things. I turned up to the hospital again and demanded Bella be admitted for observation. I am so very glad I did, because otherwise we would have lost Bella within the next day or so. A mother’s intuition and insistence saved Bella’s life.

Bella’s tumour was in the top left side of her brain and had overtaken approximately 25% of her brain at the time of diagnosis. She was extremely lucky to survive her first week following diagnosis. Bella endured 4 surgeries in that week alone, had a stroke, had seizures, had fluid drained from her brain, a blood clot in her leg and had multiple blood transfusions. The entire volume of blood in her body was transfused twice over.

With Ependymoma it is known that the best chances of survival are if a gross total resection (GTR) of the tumour is obtained. That means a total removal of the tumour. It was only after her 5th surgery that Bella achieved a GTR. We were over the moon, but shortly after received news that the cancer had come back. Bella endured another three surgeries to remove the tumour.

People that meet Bella don’t realise what she has been through unless we tell them because she is a beautiful and spirited 7-year-old girl. However, the long-term effects from both her cancer and her treatment are undeniable. Bella has now started Little Athletics, following in the footsteps of her big brother. She gives every event her best but the capability and strength gap between her and the others in her age group is significant. Not to mention that by the last event she is asking to be picked up and carried because she literally cannot walk further.

She is old enough now to realise that she is different, and it breaks our heart. This is the reality of childhood cancer. Physical activity takes so much out of her, compared to her friends. But gosh her tenacity to keep up with everyone makes me so proud.

Thankfully, we are lucky enough to be able to cuddle and kiss her every day. How many people can say their child has survived 8 brain surgeries! My happy, healthy and vibrant little girl is beating the beast and the awful statistics for survival, with only 1 out of 5 people with brain cancer surviving 5 years from diagnosis.

This ferocious beast has left us forever changed, forever haunted. Whilst we try not to let it consume us, it is always there.”