“Our son fought like a warrior accepting all treatments, enduring everything that was thrown at his body." 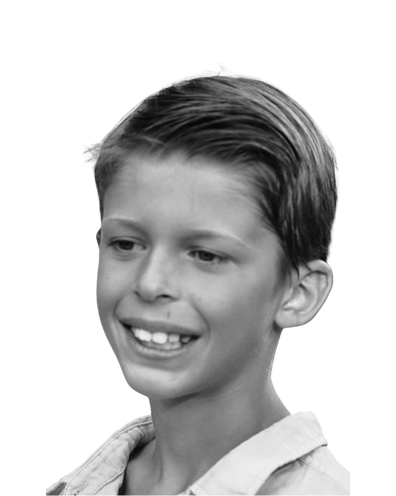 “Enguerrand was born on June 15th, 2004 in France. He was a kind, smart, and athletic young boy with lots of energy. Enguerrand enjoyed traveling, going to school, and being outside. His favourite sport was tennis, and he aspired to be a pro tennis player. He was very fond of tennis star Rafael Nadal, and he also won some tournaments of his own, and was ranked in the sport.  Enguerrand had lots of personality and made friends easily.

But an unusual fatigue set in, followed by vomiting, loss of strength in the left hand and disturbances of balance. So we asked for a brain scan in July 2017. Just 5 weeks after his 13th birthday, Enguerrand was diagnosed with Diffuse Intrinsic Pontine Glioma (DIPG). This was a tsunami in the family.

After his diagnosis, we went on holiday to the Bassin d’Arcachon and we kept travelling a lot making sure we spent time with him as time was running out. We knew we had six to nine months left with him.

On our return, Enguerrand had radiotherapy and chemotherapy which was so tough on him. Seeing him go through that was heart-breaking.

Enguerrand fought long and hard and never gave up. For 11 months, he made the most of everyday, and continued to do what he enjoyed for as long as he could. Enguerrand brought joy to everyone around him, and rarely complained.

Sadly, on July 9th, 2018 just 24 days after his 14th birthday, our precious Enguerrand earned his wings.

Our son fought like a warrior accepting all treatments, enduring everything that was thrown at his body and what was humanly possible to endure, but always with a smile, even to the end. We will never forget Enguerrand and the fight and excitement he brought to life.”