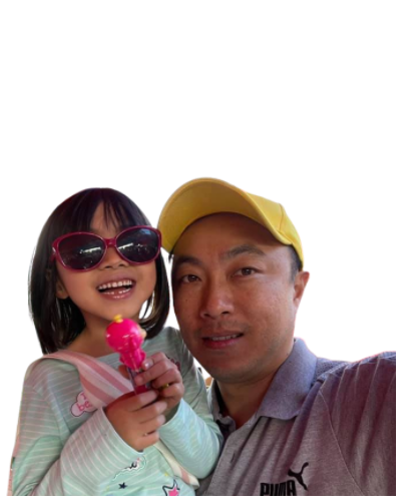 “One summer afternoon in November 2020 my wife and I received the worst news any parent would want to hear. We were told that our beautiful 6-year-old daughter, Maddie, had brain cancer.

Maddie had been experiencing headaches, at one point so severe that we rushed her to hospital. We knew something was wrong and following several tests the doctors found a tumour in Maddie’s brain.

At that time we were reluctant to tell Maddie just how serious her condition is. All she knew was that she is sick and having really bad headaches and she’s getting help from the doctors to try and fix the problem. We just did not have the guts to tell her any more than that because she is only six.

Following extensive tests to find out more about the tumour, we were told that Maddie has the deadliest childhood brain cancer known as Diffuse Intrinsic Pontine Glioma (DIPG) or Diffuse Midline Glioma (DMG)*. This type of brain tumour is highly aggressive and difficult to treat and is found at the base of the brain. Children with DIPG have an average survival time of just 9 months from diagnosis, and the long term survival rate (5 years) was less than 1%.

At that exact moment our world stood still. We were devastated. We had to do something for our little girl. The decision to have Maddie undergo very high-risk surgery is the hardest one my wife and I have ever had to make. We just want to give her the absolute best chance of pulling through this and living the life that she deserves.

On the 15th of December 2020, Maddie underwent brain surgery. Waiting for the six-hour surgery to be completed was the longest hours of my life. With a huge sense of relief, Maddie pulled through and the surgeon managed to remove as much of the tumour as possible to give Maddie a fighting chance against her brain cancer.

Since that time, our beautiful little girl has had to endure so much. We’ve had to take her for multiple MRI scans, wearing a radiation mask and having to lie still during her treatment which is scary and very difficult for someone so young. She’s had to go through weeks of radiation therapy and suffer the side effects that go along with it.

We look at the glass as half full rather than half empty. This simply means DIPG research and treatment has been under funded and there hasn’t been enough attention drawn to this area. And if the standard conventional recommended treatment is radiation therapy and nothing else – they simply haven’t thought outside the square or have the guts to try something new. More attention (and more funding) needs to be put into this area. DIPG is the deadliest and scariest of all childhood cancers. Something needs to be done to change this.

Reflecting on everything that’s happened over the last few months when we first started this journey, there were so many unknowns, unanswered questions, and the uncertainty caused a lot of anxiety and fear.

We have come a long way!

We are so grateful and fortunate to meet all the right people, receiving so much love, thoughts, prayers and support everywhere we go.

Make every moment count. We appreciate the fact that Maddie is still healthy and able to enjoy the moment. That moment is now! We don’t think about the past or the future, just the present. When you realise that you have everything you need now, you will feel grateful.”