“If they could do pain and suffering, then I can do this” 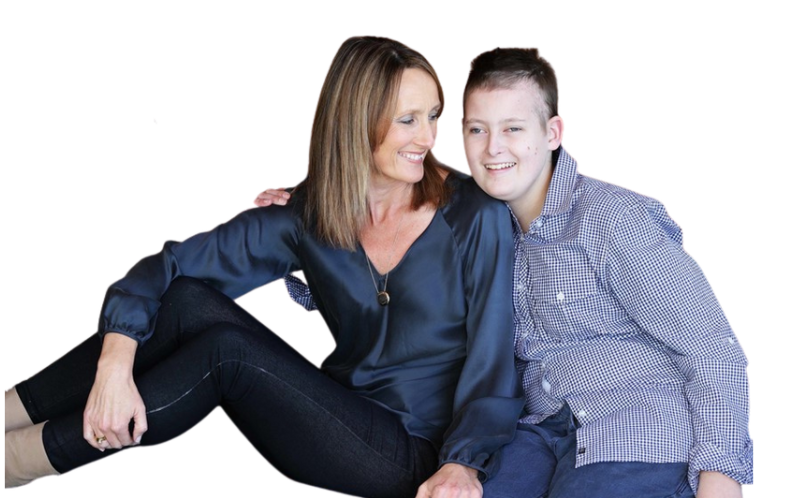 “This is our family story.

I’m going to tell you how my husband Gavin and eldest son Gus died within the space of 2 years. Gavin was 43. Gus only 15.

More importantly I’d like to tell you about how they lived.

Gus arrived into this world with no fuss. No dramas, no complications. He came into the world quietly and with strength.

When a child is born and, in this case, my exquisite first born begins a love affair like no other. I will never forget lying next to him in hospital that first night in absolute awe. Here is this child, part me, part Gav, but a human being that will take flight on his own path. We would never have known then what that path would be.

Gus was a beautiful child who possessed a quiet strength. Observant, with a shyness about him too. The kind that observed the world in intimate detail with an inquisitive and creative mind. His thought pattern was lateral not literal. He was, in short, what’s known as a brainiac and he used his brain in ways that left us in awe. Gus was always a mean contender when it came to a school awards ceremony!

So then, in year 6, at the age of 12 came a very cruel blow. The very thing that strongly defines Gus, his brain, is under siege. An insidious tumour. Like that very first night in hospital lying next to him I will never forget this night. Gavin and I were crushed. We couldn’t believe this is happening inside our amazing and beautiful boy.

We were already reeling as this news came on the back of Gavin’s lymphoma diagnosis just one month prior. Gav was fully embarked on a chemotherapy regime. Gus was about to embark on the same journey. You can imagine how our world had quickly turned upside down.

We are talking about a boy who has already shown strength of character. An extraordinary boy, and the way he is about to handle his illness is even more extraordinary.

It astounded Gavin and I just how accepting Gus was of his diagnosis and the suffering that came with it, the resulting limitations and adjustments to be made to his everyday life.

Several surgeries with Dr Charlie Teo, aggressive radiotherapy, seemingly endless chemotherapy. Treatments almost always closely followed by platelet and blood transfusions. Weekly blood tests and oncology visits. Continual streams of MRI’s. Gus was a frequent flyer and the hospital staff loved him and knew him well. Too well. For someone who didn’t do fuss or drama this life was turning out to be pretty dramatic.

Gus never complained… he simply trusted and took it on. He didn’t waste any energy on ‘why me’ nor did he let it consume him or his spirit.

Gus taught me the ultimate in acceptance.

Gavin continued his work throughout his illness to see a very important vision he had come to fruition. He was the founder of R U OK? Day. And the reason for its inception was because in the first year of our marriage Gav’s beloved dad Barry took his own life.

All through his sickness Gav relentlessly worked on his R U OK? project. He was determined, like a dog with a bone.

Amongst all of this, their stories intertwined, Gav’s own battles were getting tougher. As well as being Gus’ dad he was also his comrade and mentor as they fought their cancers side by side.

Even in Gavin’s death Gus resilience, trust and strength reigned supreme. Saying goodbye to his dad knowing that could be his destiny too was heartbreaking to watch.

I used to say that Gus lived his life with his eyes wide open. He noticed things, he engaged with people, with little babies, with life. He lived each day as though it were a gift. Not as if it were going to be his last, but just that it was a gift.

We’d have these amazing little chats at night when I tucked him into bed. There was a ritual. We’d start with a big stand up hug and often he’d say ‘I’m here for you mum’ or ‘did it hurt when you fell from heaven’. Then we’d have a little take on the day which usually involved talking about one of my many ‘epic fails’ or just something about how much he loved me, how he needed another kiss and hug from his little brother Van (one last one) or how crazy his sister Josie had been at dinner. Our chats were never about tomorrow because he was always in the present.

We were sitting in Dr Teo’s consult room. I had my sister and father-in-law with me for back up. Gus was to wait outside initially. It was a grave and scary appointment. I knew that. It was discussion about should we or shouldn’t we operate? Does this brave, beautiful boy need another big risky surgery, more upset and recovery when ultimately either way his death is nearing.

It was time to bring Gus into the room and just to remind you he is now about 14 and a half years old. Charlie showed Gus the scan pointed out the new tumour and asked Gus, “what do you think?” Gus slowly scanned the walls around him looking at the framed diplomas and credentials and said, “well Charlie according to these walls I reckon it looks like you know what you’re doing, so let’s take it out”.

Simple as that. He lived like that. Positive and brave. That surgery gave Josie, Van and I extra treasured time with Gus for which I am eternally grateful.

Through this journey with Gus, we learnt brain cancer kills more children in Australia than any other disease. It is a dismal forecast.

It’s confronting being surrounded by other such children and families in the oncology wards and clinics, the surgery and radiation departments where the sense or the feeling of hopelessness is so palpable.

To think that in this progressive era in which we live brain cancer survival rates have only increased by 1% is astonishing. Hard to believe and hard to stomach.

I want to envisage a world where the funds needed for brain cancer research alleviate the devastation caused to families by losing loved ones to brain cancer. And sadly, very often, our young loved ones

Beings like Gus…smart and wise, special and innocent. A boy so loved and so loving. It’s difficult to make sense of.

Gus and Gav both lived a life of possibility.

There are two things that acceptance has allowed in my life.

The first is that it has allowed me to keep living.

I’m not curled up in a corner or on the couch each day. I can be who I want and need to be – most importantly – for my other 2 children Josie and Van.

There is a beautiful Jewish prayer that I love because it resonates with me greatly.

LET ME NOT DIE WHILST I AM LIVING.

Secondly by accepting what has happened in my life and being able to live with the pain of losing Gavin and Gus I am honouring them by living that pain with grace and dignity – just as they did.

If they could do pain and suffering, then I can do this.

We can make big things possible. There are enough big brains out there researching big doses of hope.

Charlie does wonderfully brave things as a surgeon, in my case making extra time with my son possible. The fact that he places just as much emphasis on funding the research into a cure is equally inspiring.

We need to get closer to a cure that I and many others ache for, and research is the only way we’ll get there.”